You are at:Home»Articles»‘UK-India Week 2019 is about setting the pace for an exciting new innings’
By Saloni Shah on June 28, 2019 Articles, Business, New

Speech by Manoj Ladwa at the Launch of UK-India Week 2019, House of Lords

Your Excellency, Secretary of State, My Lords, Ladies and Gentlemen

Thank you Jitesh [Lord Gadhia].  Thank you for those very kind and generous words.

But, it’s always dangerous speaking after Lord Gadhia, who has perfected that art of saying everything I would have wanted to say, and much more lucidly than I could ever manage.  A bit like watching India bat before England.

I am grateful to you and to Your Excellency, High Commissioner, for agreeing so graciously to host this wonderful lunch to launch UK-India Week 2019.

I am also deeply grateful to you Secretary of State for stepping in at the last minute for the Foreign Secretary, who understandably has a few other things more pressing things on his mind!  For me, your presence during this busy times only goes to underline your own personal commitment, that of the Foreign Secretary, and indeed Her Majesty’s government to the UK-India relationship.

Thank you also to Sir Simon [McDonald] for the support and enthusiasm of your team at the FCO in embracing UK-India Week 2019 as a significant landmark in your calendar.

And to you Tom [Tugenhadt], for your Committee’s excellent, and dare I say, refreshingly candid report on the UK’s relations with India.  I am thrilled that you have decided to release it to coincide with UK-India Week 2019 and our annual Leaders’ Summit.  I must say with such military precision, and master-stroke of impeccable timing that even Sachin Tendulkar would be proud. 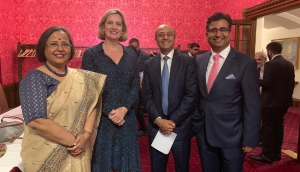 As someone who was born and brought up in inner city Birmingham, to immigrant Indian parents, having studied in state schools, and having had to rely on state support for much of my childhood, I feel very proud today to be standing here before you.

And to be able to say with equal pride and comfort that I am as British as I am Indian.  I know it says a lot about my parents and my own cultural upbringing, but it equally says a lot about Britain too.  Where in Parliament Square, two of the 20th centuries most celebrated adversaries, Sir Winston Churchill and Mahatma Gandhi, today enjoy pride of place, and indeed where Curry & Chips is considered a national delicacy.

Brexit has opened some very difficult fault lines in British society and raised many questions overseas, not least in India.  Therefore, I very much hope whoever becomes the next Prime Minister, will quickly and decisively work to address the anxieties of people like me, and many others in this room, who not only care, but live and breathe the mantra of a Global Britain.

It is so nice to see so many of our friends in parliament from across the political spectrum, many who have also lived and breathed that same journey, and continue to contribute so much for the benefit of both our great nations.

Friends, the companies and organisations you represent demonstrate both the work done so far, but also the potential for great success ahead.

I am particularly pleased to see that companies like Infosys, Tata, and Bharat Forge, some of the biggest employers in the UK, are here today.  So too our friends from the Confederation of Indian Industry, led by its President, who have especially flown in for UK-India Week 2019, and many more, all underlining the fact, that Brexit or no Brexit, India is backing Britain.

Tom, your report candidly and quite rightly talks about ‘missed opportunities’.  But in putting a mirror to the UK’s engagement with India, I believe we will, during the course of this week, trigger some very exciting ideas in response.

For instance, later this afternoon, we will be releasing in the Commons, the third edition of India Inc.’s popular ‘100 Most Influential in UK-India Relations’, a compendium of inspiring people who contribute to strengthening the bi-lateral relationship.  A list that many of you have of course deservedly featured in.  But, High Commissioner, Secretary of State, I am really proud to say that this year, for the first time ever, the list is an all womens’ list! Highlighting that to play in this game, you just have to be good!

This is also a tribute to the fact that India now has in Her Excellency the second women to serve as High Commissioner to the UK.  I can only say, that we eagerly await the UK to appoint its first!

Friends, with over 100,000 active global users, and over 30,000 in the UK alone, my team and I are passionately committed to building the bridges, the networks, and reimagining the future of the UK-India Partnership.

Once again, thank you to Your Excellency and Lord Gadhia, and to each and every one of you for attending today and giving UK-India Week 2019 the best possible start.  Thank you.