The shrill debate around the Indian government’s recent decisions on Kashmir and citizenship has clouded a slew of measures that reflect a broader, more progressive social and economic narrative, writes India Inc. Founder and CEO Manoj Ladwa.

If you read much of the media coverage on India these days, you could be forgiven for being left with an impression that the country is on the verge of a totalitarian takeover. Its vibrant democracy and tradition of standing strong on human rights have all been the subject of many doomsday predictions.

Yes, Prime Minister Modi has taken some very firm, some would argue rather draconian, decisions in his pursuit to bring some semblance of peace and normalcy in the terrorist-ridden northern state of Kashmir. Enacting a piece of legislation on citizenship to fast-track the asylum process for persecuted minorities from neighbouring countries, which opponents say discriminates against Muslims, is another such controversial measure. Or indeed, the tightening of the law to impose the death penalty on convicted child rapists, would certainly worry those that stand morally against capital punishment.

All these measures appear to have found the backing of an overwhelming majority of Indians in opinion polls on the issues. But they have not played out well elsewhere, especially within the many parts of the western media and political circles. 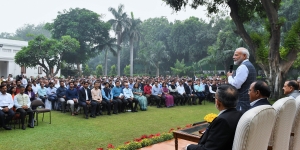 The debate on these legislative measures in the liberal West is predictable and, to some extent when one looks at it from that lens – how wide or narrow that lens may be is a matter for another debate, also somewhat understandable. But what is not understandable is the sheer lack of discussion, let alone appreciation for the raft of legislative policies that Modi has pushed through since winning a stomping majority barely eight months ago. These are policies that progressives anywhere in the world would otherwise have been celebrating with gusto, but for the fact that they have a bogey when it comes to Modi.

So, for the eight months since the start of Modi’s second term, here are eight pieces of legislation that will hopefully bring back some sanity to pessimistic predictions and go some way in wiping that rather foggy progressive lens.

The PM Kisan Yojna, directed at the families of small and medium farmers (kisan) of India, offers the kind of pension protection that will go a long way in shoring up the income of a large chunk of the country’s working population. The scourge of famer suicides often hit worldwide headlines and with this ambitious measure, Modi has tackled a social issue head on with crucial financial support for farmers.

The establishment of the Jal Shakti Ministry, dedicated to water (jal), is an important step towards breaking down the silos on one of the most pressing issues of our time – water conservation and access to clean drinking water. The allocation of a further half a billion dollars towards climate change initiatives in the recent federal Budget is another sign of the kind of robust policies that the Indian government is putting in place, not least Modi’s personal commitment to initiatives such as the International Solar Alliance.

Besides tackling rural poverty and environmental challenges, the government has shown a single-minded focus on fulfilling the promise of electricity for all and housing for all. One of the vital measures towards that goal is addressing the impact of corrupt urban planners of the past. After a Bill passed by the Indian Cabinet last year, at least 4 million mainly urban poor in Delhi alone will benefit from the security of knowing that their home will not be the target of bulldozers and corrupt officials.

The Indian government’s historic decision to remove an anomaly in the Indian legal system, where Muslim women were not permitted fair and equitable divorce rights that their fellow Indian women enjoyed, deserves far more attention than it has received around the world.

India has a long history of being at the forefront of ensuring the rights and freedoms of all its citizens and following the decriminalisation of homosexuality in its previous term, the Modi government has stepped up on the issue of transgender rights with a Transgender Rights Bill.  There are many countries around the world, including in India’s immediate neighbourhood, that still continue to discriminate against homosexuality and transgenders. This legislation firmly sets the Modi government apart.

By establishing the National Medical Commission, the Indian government aims at improving access to quality and affordable medical education in order to bolster access to high quality medical professionals in all parts of the country. The acute shortage of healthcare professionals, with the patient-doctor ratio being significantly below many countries, has been a cause of major concern for many years as India seeks to tackle some of the world’s worst ailments.

An extremely well-timed move to ensure that those that dutifully pay their taxes in India are not the target of heavy-handed tax officials. The charter will help enshrine taxpayer’s rights in law and safeguard against perceived aggressive actions of ground officials. It forms part of wider efforts, including lowering Corporate Tax to encourage foreign investments.

In order to overturn India’s troubling road safety record, a more stringent Motor Vehicles Amendment law has been brought in to make India’s notoriously dangerous roads safer for both vehicles and pedestrians.

Now, the above is just a snapshot of the variety of measures that have most resonated with me personally. But there is a flurry of initiatives being undertaken by the Modi government in an effort to live up to its overwhelming mandate from Indian citizens for reform and progress.

But as the poet John Lydgate aptly put it, “you can’t please all of the people all of the time”. I hope, however, highlighting the above encourages a less clouded assessment of the current state of India’s democracy and governance.